Yo Ho, Yo Ho…A Pirate’s Life For ME

It’s almost Halloween, and I’ve been in a piratey mood lately. This essentially means that I watched Disney’s Pirates of the Caribbean trilogy, downloaded the soundtracks, and I’m writing this post. I’ve decided to review the entire DISNEY’S PIRATES OF THE CARIBBEAN GENRE. Yeah, that’s right, I’m hardcore.

It all started at Disneyland in 1967 with the audio-animatronic pirate boat ride and the theme song “Yo Ho (A Pirates Life for Me)”. I give the Pirates of the Caribbean ride at Disney (Disney World) 10 ramheads out of 10. It was left alone (aside from going to Disney World) until the early 1990s, when a couple of screen write rs wrote a script based on the ride. It got pushed aside for Muppet’s Treasure Island until 2002. Disney had some other screenwriters try and fail until they brought the original two back and here we are today with (Captain) Jack Sparrow.

Pirates of the Caribbean: The Curse of the Black Pearl was released in 2003. I hadn’t heard about it until it came out on DVD and some of my friends said it was good. I eventually got to watch it at my aunt and uncle’s house. It was awesome. I was a Pirates fan. The acting is excellent, the music is excellent (and catchy–I listened to all the credits music), the special effects are near flawless, and the story is engaging. It was the first ever Disney movie to be rated PG-13. The movie runs 143 minutes and is a must see. I suggest that if you haven’t seen it, see it ASAP and show your kids. 10 ramheads out of 10. 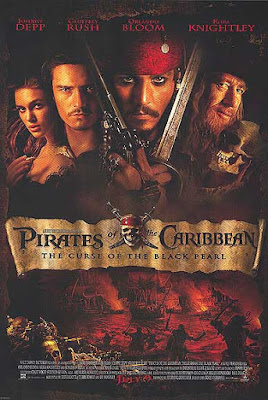 Moving on, Pirates of the Caribbean: Dead Man’s Chest was released in 2006. It was very much anticipated (by me and others) because of the first movie’s brilliance. It picks up a few months after the first movie left off and features more solid acting, intriguing story, excellent visual effects, and very good music. It is slightly more “out there”, but once the movie gets going, it justifies itself. My only objection to this movie is the fact that it only sets up its sequel. This adventure runs 150 minutes and is rated PG-13. I give it 8 ramheads out of 10. Finally, Pirates of the Caribbean: At Worlds End finished the trilogy and was released in 2007. Action was never in short supply in this film. It was a long one, but it still managed to pack it in and engage the viewer every minute. It got many negative reviews, but I thought it was an excellent movie. Every aspect was brilliant: acting, visuals, music, story, action, humor. It runs 168 minutes and is rated PG-13. I give this movie 9 ramheads out of 10. P.S. Watch the scene after the credits, it’s good. Also, if you want an explanation of it click here (it is a post by the screenwriter explaining.) OVERALL, The Pirates of the Caribbean is an amazing, fun, and immaginative genre that definitely has made itself a place in the hearts of many. I’m no exception. I give the genre itself 10 ramheads out of 10.